This Ebola Outbreak has been going on for some time now, but has not been really covered by the “NEWS” except a brief passage or two. Politics is more important then people dying. 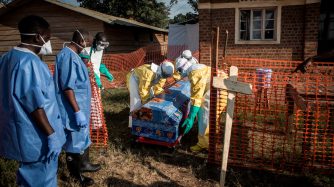 Rinsing Ebola protective gear in Beni, Democratic Republic of the Congo. (31 May 2019).

This is what led to the Public Health Emergency Declaration:

A Church Pastor in a City of 2 Million People!

And today this was posted by Reuters:

Congo Ebola victim may have entered Rwanda and Uganda, says WHO – Reuters – posted 7/18/19

A Fishmonger who had been in all 3 countries while contagious.

So if it begins to spread even more maybe the “News” will pay some attention to it and other news that is actually killing people.  Doubt it – they are to busy hating people rather than helping people.